Social Media Trends to Watch in 2022

Keeping up with digital marketing trends is a fundamental part of any marketer's job, as the industry is constantly evolving.  To help you stay informed, we've compiled the most useful social media trends for 2022.

Check them out and include them in your marketing plans to get better results! 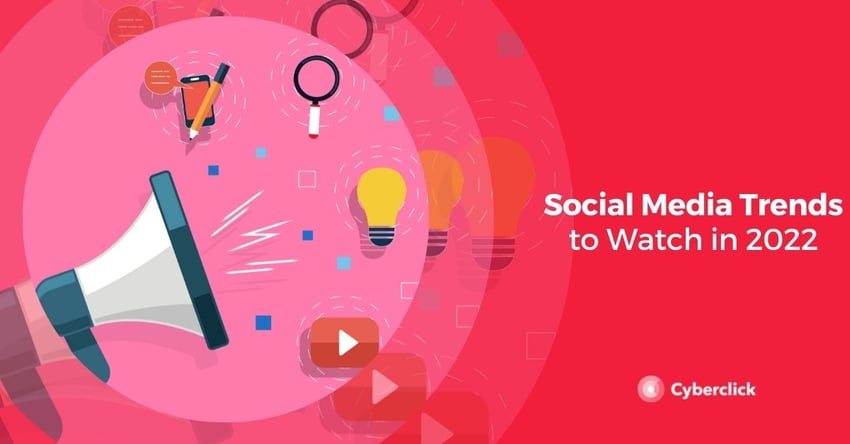 1. Increased Use of Social Networks

The data doesn't lie: social network usage continues to grow. Globally, the use of social networks including messaging apps like WhatsApp increased by 21% during the pandemic.

Thanks to smartphones, social networks have become an important part of our daily lives. Today more than ever, social media channels and networks are crucial for marketers.

The video format has gained popularity over the years. According to a study, up to 82% of online content will be in this format in 2022. This video boom is largely due to two social media platforms–Instagram and TikTok.

In the first three months of 2020, TikTok was downloaded 315 million times globally, breaking the record for quarterly downloads of any app.

To compete with this, Instagram launched Instagram Reels, a format specializing in short videos, in addition to two other video features: IGTV and Stories. Some Instagram videos have received twice as many interactions compared to in-feed photos.

YouTube also joined in last year with the launch of YouTube Shorts, and live streaming found a place at the table as well.

Although users are spending more time on social networks than ever before, it is also true that they are spending less time interacting with individual posts. According to some studies, the average attention span of a user is 8 seconds (20 years ago, it was 12). Data indicates that users spend even less time on each piece of content when they connect from cell phones.

Social networks are already adapting to this trend of short but high-impact content. Marketers should also take note and think about how to translate messages into short but engaging pieces of content that generate interactions in just a few seconds.

4. Social Networks as a Purchasing Platform

One of the most promising digital marketing trends is the ability to shop directly within the social media channel without having to leave the platform.

During the pandemic, consumers quickly became accustomed to purchasing items from social media platforms, directly from the post or story they were viewing. In fact, the number of users making purchases on social networks in the United States increased by 25.2% and now exceeds 80 million users. By 2023, it is expected to surpass 100 million.

This trend is even more evident among younger users. 37% of consumers between 15-22  years old made purchases directly from social networks in 2021. What is even more compelling is that 30% of users bought products from Instagram stories by using the "Swipe Up" feature.

As the popularity of social shopping continues to grow, more and more networks will be incorporating the ability to buy products in-app, so that the user doesn't have to leave the platform to make a purchase.

Facebook remains the most used social network in the world, with 2.91 billion active users. Users are spending an average of 58 minutes on Facebook per day. Despite the rise of new platforms, there is no doubt that it is still the leader.

In addition to the gross number of active users of each network, it is important to understand your buyer persona and the sites they visit frequently. This is the only way to have a strategic presence that reaches your audience exactly where they are.

It is estimated that by the end of 2021, 48% of consumers will use augmented reality in one way or another and that by 2023 this market will generate between 70 and 75 billion dollars annually.

Social networks have been early adopters of this digital marketing trend. Instagram incorporated augmented reality filters in 2017 and since 2019, it has offered users the option to create their own filters. Statistics indicate that with filters, users spend 4x as much time interacting with videos. On average, users interact with filters for about 75 seconds.

In the coming years, expect the use of augmented reality in social networks to be on the rise.

One of the most well-known phrases in digital marketing is "content is king."

8. Micro-Influencers Will Have More Say

Influencer collaborations are not new, but this digital marketing trend is still on the rise. In 2020, brands' influencer marketing budgets increased by 65%.

Taking advantage of this trend requires knowing how to choose the most appropriate influencer for your target audience. It is important to prioritize relevance and interaction rate over the number of followers.

The name Meta allows Facebook to distance itself from the perception that the company is synonymous with social networking. With the purchase of virtual reality company Oculus in 2014 and its new virtual payment initiatives, Facebook is no longer just Facebook. The name change is a strategic move to represent the evolution of its products.

The word "meta" comes from "metaverse," which is a science fiction concept from the 1990s that describes a 3D virtual world inhabited by avatars of real people. Since then, the word has appeared in many science fiction works and more recently, Silicon Valley tech companies have started using it in a slightly different sense. Epic Games, the video game company, has used the term "metaverse" to describe crossover characters in its game Fortnite.

Mark Zuckerberg believes that in the near future, users will spend their time in a 3D immersive version of the Internet. It is not clear whether this will be through virtual reality, augmented reality, or social networks, so Meta is betting on all of them.

How to Use Clubhouse to Earn Money in 2022

How Product Catalogs in a WhatsApp Business Account Can Increase Sales