While viral video marketing is made more easily achievable with social media, social media virality and video virality are not the same. By nature, videos allow brands to make long-form and interactive content that touches audiences in a meaningful way. 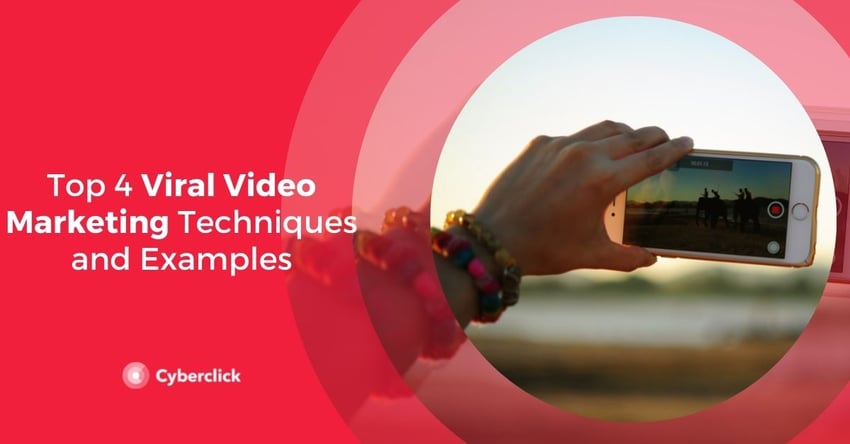 Making a video go viral is never guaranteed, but there are some techniques you can use to help boost your chance of achieving this. These are 4 of our top viral video marketing techniques:

Much like traditional SEO, video SEO is important for making your viral video as easy as possible to find.

Take a look at the title of your video. Does it include the campaign’s hashtag, the name of your business, and the purpose of the video?

The thumbnail of the video is also important in video SEO. When creating video thumbnails, make something that will hook the audience in yet also be easy for them to understand what the video is about.

The most valuable aspect of viral video marketing is evoking emotion in the consumer. Hope, inspiration, humor, shock, or even anger can trigger rapid-fire virality.

Viral video marketing doesn’t always have to be expensive. A frequently cited example of successful viral video marketing is GoPro’s Fireman Saves Kitten video. This video not only caught the attention of millions of viewers but also subtly showed the durability of GoPro cameras. As Disruptive Advertising puts it, this video works because “it wasn’t an emotional video about GoPro–the GoPro just kind of happened to be there.”

Viral video marketing can have many different forms. One of them is simply traditional advertisements that take on a new life online, like Dos Equis’ Most Interesting Man in The World. Some are actually part of a larger series, like Blend Tec’s popular Will It Blend? videos and some are simply stand-alone knockouts, like Dove’s Real Beauty Sketches.

Decide what kind of format your video will take and what its overall impact on your brand’s message and voice will be. As the Dove and GoPro examples show, viral video marketing campaigns can serve as a good way to show–not tell–what your brand believes in.

4. Optimize Across All Channels

The goal of viral marketing is to “break the internet.” In order to do so, you need to ensure that your content is not only accessible on a variety of channels, but also optimized for each platform’s unique delivery method.

We recommend posting on all of the major platforms: YouTube, Facebook, Instagram, and TikTok. But, this should be done strategically. While this may sound like a no-brainer, this simple strategy is often easily forgotten by many brands.

When promoting a viral video, be aware of the maximum time limits on each platform, and optimize the shorter platforms (TikTok and Instagram stories) by using fun and enticing clips that link to the longer version (like including the option to follow through to IGTV in an Instagram post).

TikTok marketing has grown exponentially. There are many opportunities to go viral on TikTok if brands truly try to understand how this unique app works and how users consume the content.

In 2019, Chipotle invented the "Lid Flip Challenge" where TikTok users had to film themselves trying to flip their Chipotle lid onto the bowl. Sounds easy, but it’s not!

To launch the campaign, they partnered with a popular Gen Z influencer and the result was over 104 million video views and 110K user-generated challenge submissions.

This challenge represented a new era of viral videos. Previously, viral video marketing used to mainly come from expensive Super Bowl commercials or popular ads that went viral on YouTube. But this challenge proved that as our platforms evolved, what constituted a viral video also evolved.

The lesson: TikTok often has many different hashtag challenges in the app, and inventing or participating in a challenge that is fun and entertaining is a sure-fire way to try and go viral on TikTok.

Ahead of the 2019 holiday season, Peloton released an ad that went viral for all the wrong reasons. Users criticized the ad for being sexist and sending the wrong message. The ad went completely viral and consumed almost every social media feed and news segment for an entire week (interestingly enough, despite the intense amount of negative press, Peloton actually reported increased revenue and members). Eventually, Peloton removed the ad from YouTube and its TV spots. Aviation Gin, a liquor company owned by actor Ryan Reynolds, took advantage of this opportunity and capitalized on Peloton's failure.

Aviation Gin hired the same actress from the Peloton ad and created a commercial that implied that the “Peloton wife” was newly divorced from the husband from the original ad, sipping a stiff glass of Aviation Gin. This ad instantly went viral and received just as much attention as the Peloton ad, but with praise instead of criticism.

The lesson here is that using humor to take advantage of viral moments is a high-risk, high reward viral technique. This is an exceptional example of trend jacking to the top degree.

3. Gillette–The Best A Man Can Get

This use of viral video marketing shows that virality can also be used to take a stand and showcase your company’s values and mission. This video was shot cinematically, touched on controversial subjects, and emphasized the company's values. As consumers continue to indicate that they want companies and brands to take fierce stances on social issues, Gillette took the opportunity to show up.

The video currently has over 37.5 million views and has sparked debates all over social media and the news.

Finally, and possibly the most cited example of viral video marketing is Dollar Shave Club’s "Our Blades Are F***ing Awesome."

If you think only major brands can do viral marketing, think again. Dollar Shave Club was practically unknown when this video was released, but that changed just 48 hours later after the video took the internet by storm.

The lesson: you don’t have to be a multi-million dollar company with a huge budget and name to go viral. Especially now, with TikTok, all it takes is a good idea and a little ingenuity and your videos can go far.