Cost-Per-View (CPV) is a new billing model for online advertising. It’s a method of charging for a video ad based on the number of views or interactions it receives, and it’s becoming an increasingly popular model for online promotions. CPV can fluctuate based on ad length, creative quality, targeting, and auction dynamics, among other factors.

It’s important to understand the difference between cost-per-view and impression-based campaigns such as cost-per-action, so we'll break down how CPV ads work, and what types of CPV ads are available to help you find the best format for your advertising needs. 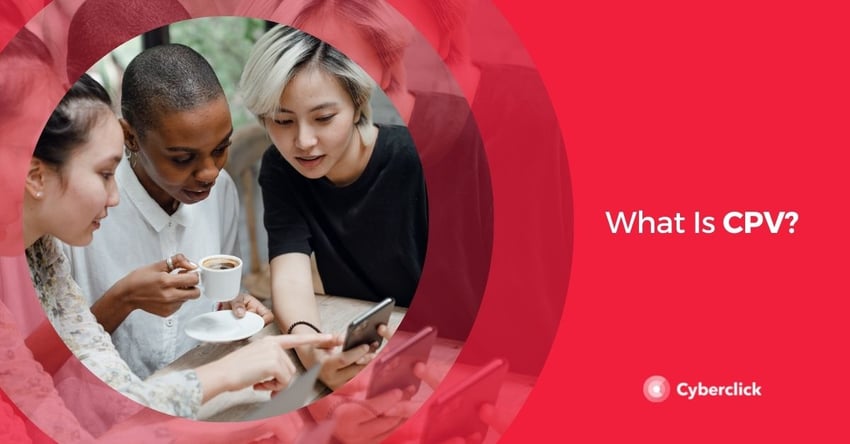 Cost-Per-View, also known as CPV, is an advertising payment model where marketers pay for video ads based on the number of views or interactions they receive. This includes clicks on call-to-action overlays, cards, and companion banners.

For example, if you pay $0.10 CPV and your video is viewed 1,000 times, then you would pay $100 in total for your video ad (10 cents each time your video is played). This can be a cost-effective way for you to connect with your target audience and expand awareness of your brand. You can also use data to evaluate how engaged your audience is with your content.

Generally speaking, a video doesn’t have to be watched in full to cause a payout. Usually, a view is counted as when a user watches 30 seconds of your ad or interacts with it in some way (whichever comes first). This differs from traditional pricing models, such as CPCV (cost per completed view), CPI (cost per install), and CPA (cost per action).

How Do CPV Ads Work?

The CPV method is generally associated with Google, and it is the default billing model for TrueView video ads in Google Ads. However, due to its increasing popularity, other outlets such as Facebook have begun experimenting with similar plans.

Cost-Per-View is proving to be a highly effective model for raising brand awareness. CPV campaigns are cost-effective and it’s easy to track conversions. Plus, the ads are highly customizable and it’s easy to adapt them specific advertising goals.

So, how does it work exactly?

The answer is simple. Each time a user watches at least 30 seconds of your video ad, or interacts with it in some way, you are charged. In other words, you are only charged when a user performs a deliberate action. This is far more cost-effective than paying for each impression (as with the Cost-Per-Impression billing model), as if a user has decided to view your ad, then they are likely to already have a degree of acceptance towards your advertisement, so you are not paying for a wasted action or impression. This helps to drive up engagement and retention rates.

To work out the Cost-Per-View, you just need to divide the cost of an advertisement by the total number of views.

For a TrueView In-Stream video ad, you'll pay a maximum of 0.25 USD when someone watches 30 seconds of your video (or the duration if it's shorter than 30 seconds) or engages with an interactive element, whichever comes first. Interactive elements include call-to-action overlays (CTAs), cards, companion banners, and links to your site or mobile app.

For an In-Display video ad (also known as an in-feed video ad), you'll pay a maximum of 0.25 USD when someone clicks on a video ad thumbnail or title and begins watching your video.

As mentioned above, the Cost-Per-View billing model is the default way to set the amount you'll pay for TrueView video ad in Google Ads. Within the Google TrueView system, there are two different types of CPV ads: In-Stream and In-Display.

The type you go for will depend on your specific business. It’s always a good idea to play around with both types to see which format works best for you. Remember, you will only pay for views when users interact with your ad, so this gives you a lot of freedom to experiment with different approaches.

Let’s take a look at the difference between In-Stream and In-Display ads.

In-Stream video ads appear before or after other videos on YouTube. They are also used on others sites such as video publisher pages on the Google Display Network (GDN), as well as Android and iOS YouTube apps (on iPad and Android), and connected TVs.

Think of In-Stream video ads as the online equivalent of commercial breaks on TV. Before a viewer can watch the YouTube video they have chosen, they are made to watch the first 5 seconds of an ad. They then have the option to continue watching the ad or skip ahead to their chosen video.

You are only charged for a view when a user does one or more of the following (one charge per user):

In-Display ads appear directly in YouTube or other Google video search results and are presented as clickable choices alongside other videos. They are displayed as preview images with a description and headline and are marked as sponsored listings.

With a TrueView In-Display video ad, you are only charged when a user clicks on your ad preview. These can be a great way to familiarize your target audience with your brand, and this format gives you the ability to track and monitor your ad engagement and the success of your campaigns.