What is Augmented Reality and how will it affect Digital Marketing?

Everyone who is anyone in the Tech world nowadays has been taking the concept of Augmented Reality very seriously in recent times. The term has become somewhat of a buzz word, and seems to be popping up everywhere. But, for those of us who aren't tech experts, it can be hard to pin it down. So, what exactly is Augmented Reality? And how is it going to affect us as marketers in the digital world?

Augmented reality (AR) uses digital technology to overlay information in video, text or image format onto everyday objects in the real world. The user will normally use a smartphone, tablet or headset to view the world using AR.

AR provides marketers with the ability to transform a static object, such as a printed advertisement or magazine cover into an immersive 3D experience. AR differs from virtual reality. While virtual reality operates by fully immersing the user in a computer generated world, AR adds to the world the user would normally see and enhances it using digital overlays. 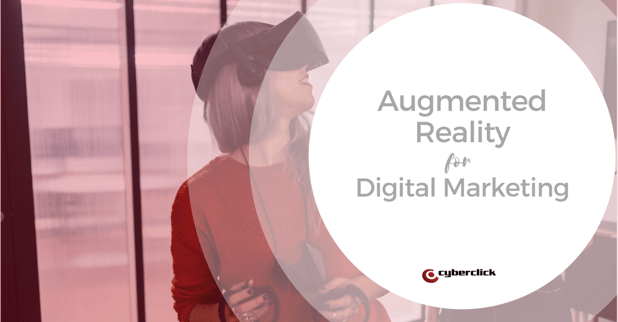 When a user scans an AR trigger using their device, the AR app will search for patterns of images or video to be display over the view from the devices camera. As the person moves the device, the AR overlay will also move, allowing the user to view the projected information from different angles.

There are two versions of AR technology currently in use:

Marker based AR - Marker based AR uses a 2D marker, such as a QR code, barcode or watermark. When the user points a device at one of these markers, it triggers the AR experience.

Markerless AR - Markerless AR can use any part of the real world as the trigger to launch an AR experience. The markerless trigger could be an image or a location. AR apps installed on phones can use GPS information to trigger AR when the device is in a certain geographical location and positioned at a certain attitude.

The Uses of AR

AR use can be grouped into three categories:

The Benefits of AR

The Future of AR

While AR technology is still in its infancy, it is beginning to catch on and the almost limitless possibilities it presents mean that it has huge potential. In 2012 there were 188 million downloads of AR apps. By 2017, it is expected that there will be 3.5 billion downloads.

As companies such as Google and Facebook continue to develop AR viewing technology and app developers continue to refine software, it is likely that AR will soon become an established and vital tool of any digital marketing campaign. By keeping up-to-date with developments in the AR industry and planning how you can incorporate augmented reality into your future marketing campaigns, you can keep from falling behind in the digital marketplace.