Viraljacking: How to make your content viral (+ success stories)

Viraljacking is a concept that I’ve developed from the basis of newsjacking. In today’s post, I will explain this new new concept through the use of two examples. The two examples aim to explain how I applied viraljacking and the results I obtained from doing so. I hope that you can learn from them and then be able to use viraljacking in your marketing strategy or brand diffusion. 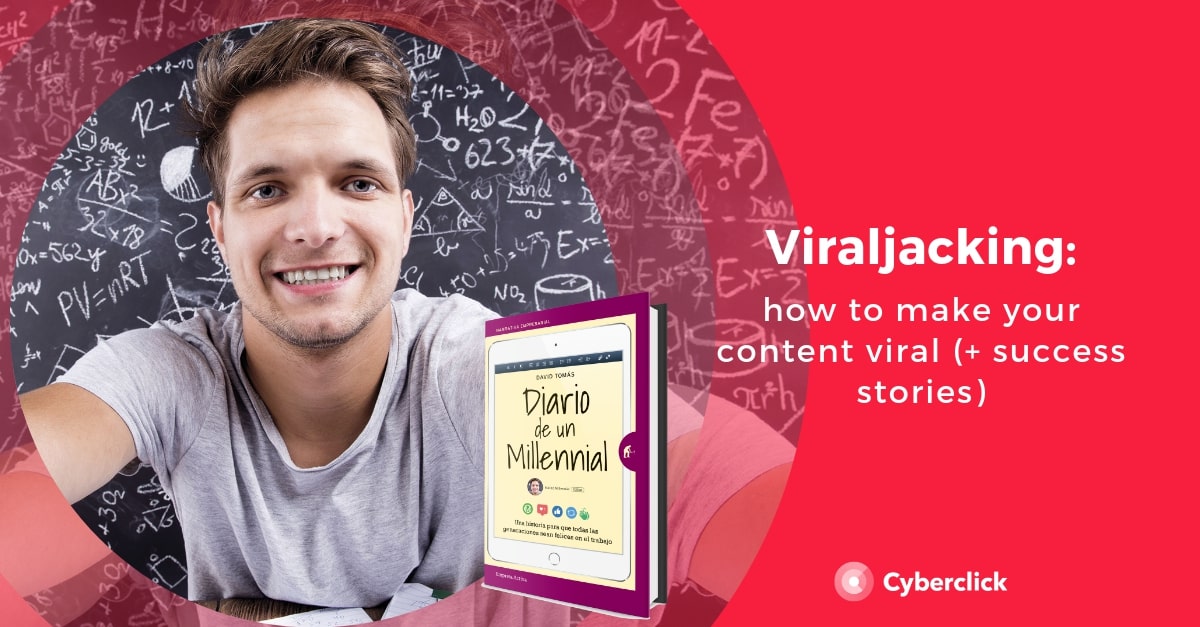 Newsjacking is a technique that’s based on creating relevant content about your business, product, or service that’s related to the most current news. In 2011, David Meerman Scott pioneered the use of this word and developed its concept. For example, in his personal blog he comments on how several businesses were taking advantage of the 50th anniversary of the moon landing of Apollo 11 by creating exclusive content related to the topic. IBM commemorates it with the message that they created the microchip that took humanity to Earth's satellite and pays tribute through a microsite. 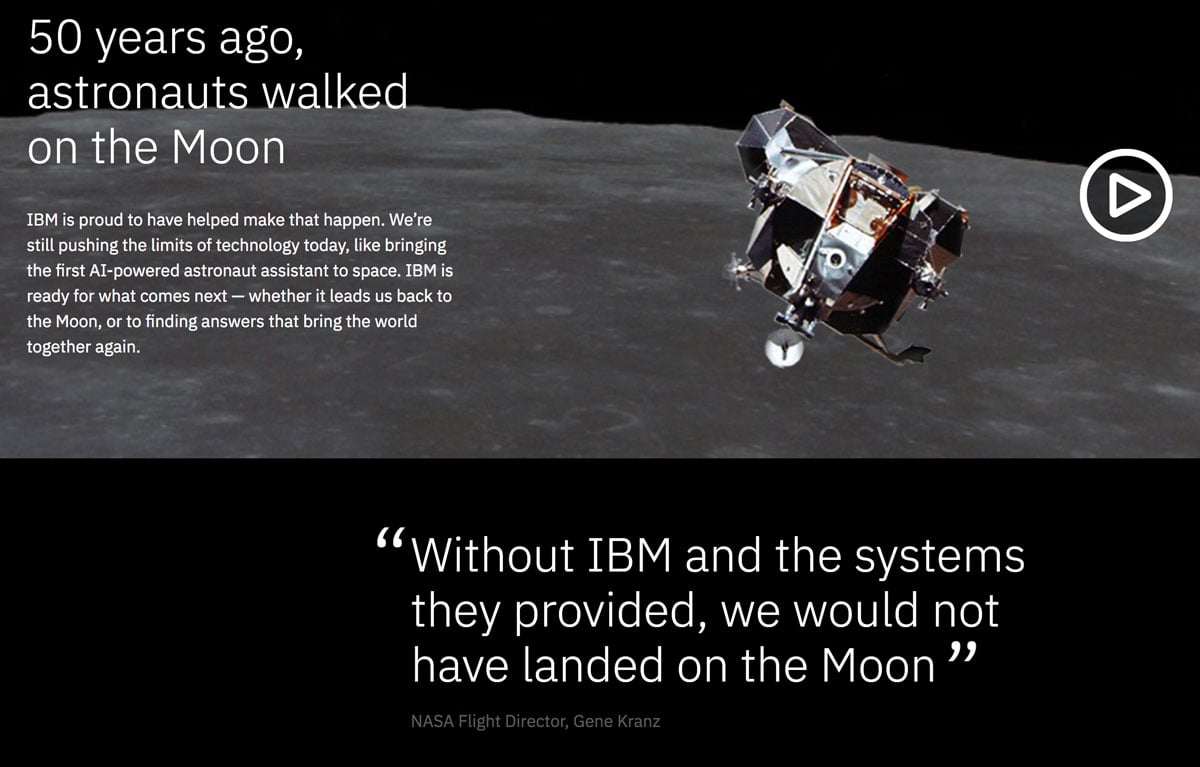 Hasselblad put the first cameras on the moon and has written a press kit. Omega has launched a special edition of the first hand watch that reached our satellite with all the information on this microsite.

Over time, I've done several newsjacking actions, but the Mailtrack case has always been one that I’ve liked to share. The Mailtrack newsjacking case turned extreme and reached absurdity.

Mailtrack is an email tracking tool. Mailtrack had integrated Whatsapps double check tool into emails. This way, when someone emails are read, the application shows a double check.It was this shared feature with Whatsapp, that had allowed Mailtrack to take advantage of Whatsapp publicity, through newsjacking.

When the news came that Facebook was going to buy Whatsapp for $19 billion, I saw the potential for newsjacking and called Conrado Lamas, the communications officer of Mailtrack at the time. I told him to write a press release to communicate that the Mailtrack team is very happy with the news of the purchase, as it gives the double check tool that both Whatsapp and Mailtrack use validation.

If you think about it it is absurd, since Mailtrack had nothing to do with Facebook buying WhatsApp. Nonetheless, many media channels communicated the message and blew it out of proportion. Mailtrack got more than 5,000 new users in just a few days. Mailtrack particularly benefited by the PORTALTIC post, accusing Whatsapp of having copied Mailtrack and taking advantage of them as the little guys without giving them the credit they deserve.

Viraljacking in turn, is an evolution of newsjacking. It seeks to identify viral content on social media and then we transform the content to adapt it to our business’ message interest. For some time now, Cyberclick has begun to apply this concept developed internally. The truth is that we have realized that it works very well to enhance virality. You must join existing viral conversations with related content. They can be current conversations or even past formulas, which you know will work among the audience.

I have repeatedly used viraljacking during the promotion stages of my two books. The first was “La empresa más feliz del mundo” (The Happiest Company in the World) that was published in 2015. My second book “Diario de un millennial” (Diary of a Millennial) was published in early 2019. The two are novels, fable style with moral, where I talk about the innovative business culture based on happiness.

1. Viral Content as a hook: the parody of the parody about millennials

My most recent book focuses on millenials and how they face the job. From my point of view, they are a very promising and are taking the reins of many critical future challenges. But, past generations sometimes parody generation Y out of fear or ignorance. A while back, I found a comic strip about leaders and millenials. Check it down below. 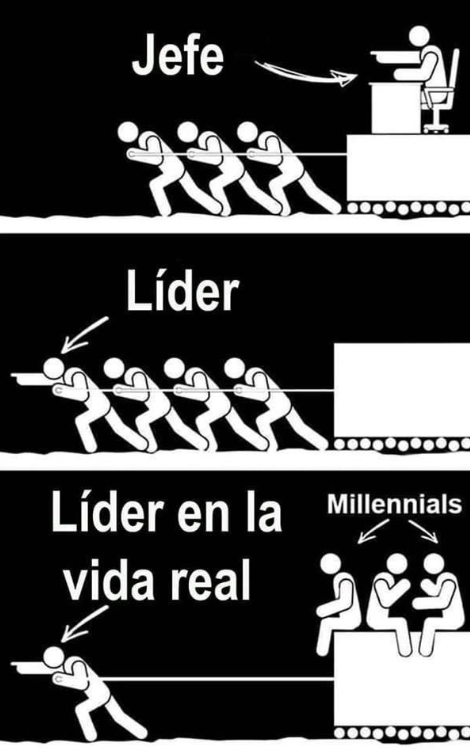 Clearly, it implies that current leaders see young people as a “burden”. From my point of view, it’s not like the comic strip makes it look. So, I took advantage of the fact that this content had become very viral to convey my opinion and link it with the promotion of my book “Diario de un millennial”. I asked Sol González, designer and front-end at Cyberclick, to do me the favor of creating another comic strip, just changing the last vignette of the original. 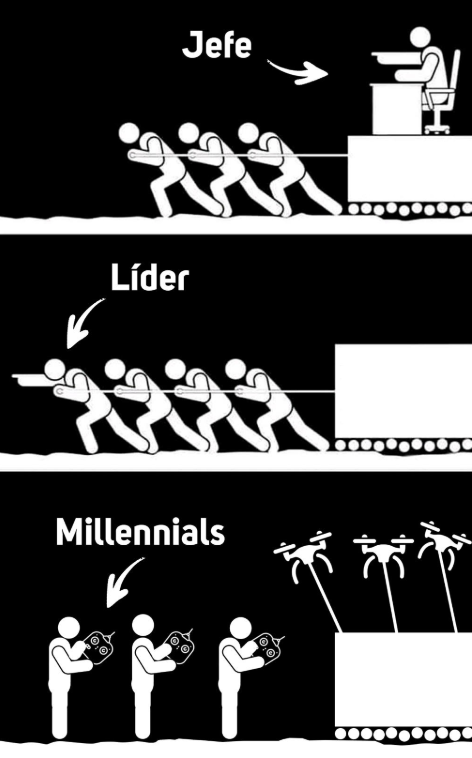 And I shared it on LinkedIn. I put the old parody and the new version side by side, where I conveyed my disagreement with the original message by saying that "millennials will not have bosses and will use technology to make their work more efficient." I continued, “I have the pleasure of working with many of them and the experience could not be any better.” In the end, I added a question to encourage interaction and hashtagged my latest book #diariodeunmillennial. 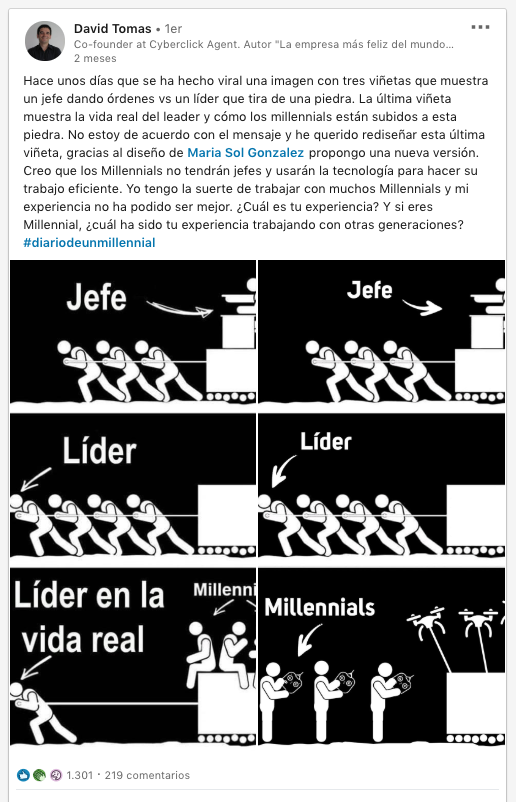 The results have been the following on LinkedIn to date:

The virality I was looking for in "Diary of a Millennial" was achieved thanks to linking new content, with an existing content that was having a lot of success.

2. Viral headline as hook: "The letter that sweeps..."

We follow another viral example, but this time putting the focus on the headline.

A few years ago I read an article that had a lot of repercussions: Isabelle Tessier's article, “I Want To Be Single — But With You” , first published on 9 July 2015. It made several rounds of the social media circuit and from there its expansion on the internet was like a snowball. translating into several languages, including English.

At that time, I was in the midst of promoting my first book "The Happiest Company in the World" and taking advantage of the crest of the wave I posted content with a similar title. In my personal blog www.davidtomas.com the article had the most impact, with almost 13,000 readings the first 3 months.

Sharing on LinkedIn generated to date:

In total, between the blog and LinkedIn it had 20,000 views. Recently, with the release of my second book, I tried my luck again with the same formula. Although the original content was no longer fashionable, but i had understood that the headline format had a hook.

This time I bet on millennials: "Letter of a millennial to your 50-year-old self." So far the content has received more than 10,000 visits.

Then I shared the article on LinkedIn. This time the impact on networks reaching far beyond those of the blog. 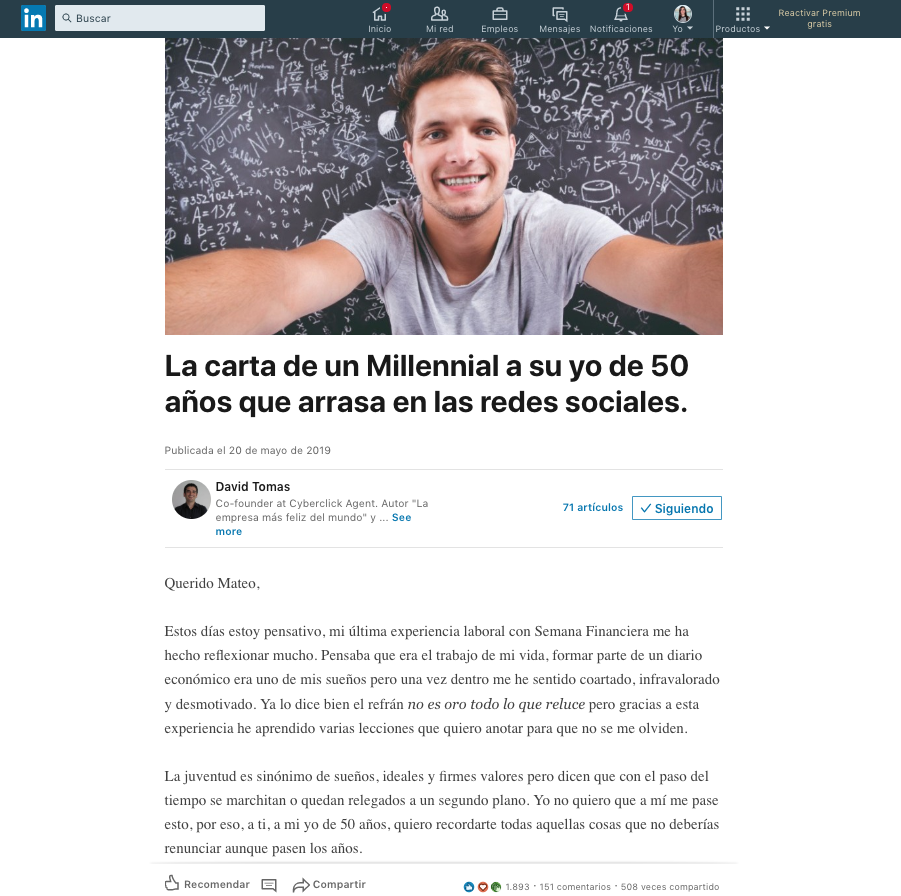 In total, this content has had almost 35,000 views between my LinkedIn and the blog.

This last article has even transcended beyond my channels and has gone viral online, appearing in other media that have referenced it organically.

In iProfessional they shared the entire letter and linked it to the book "Diary of a Millennial". 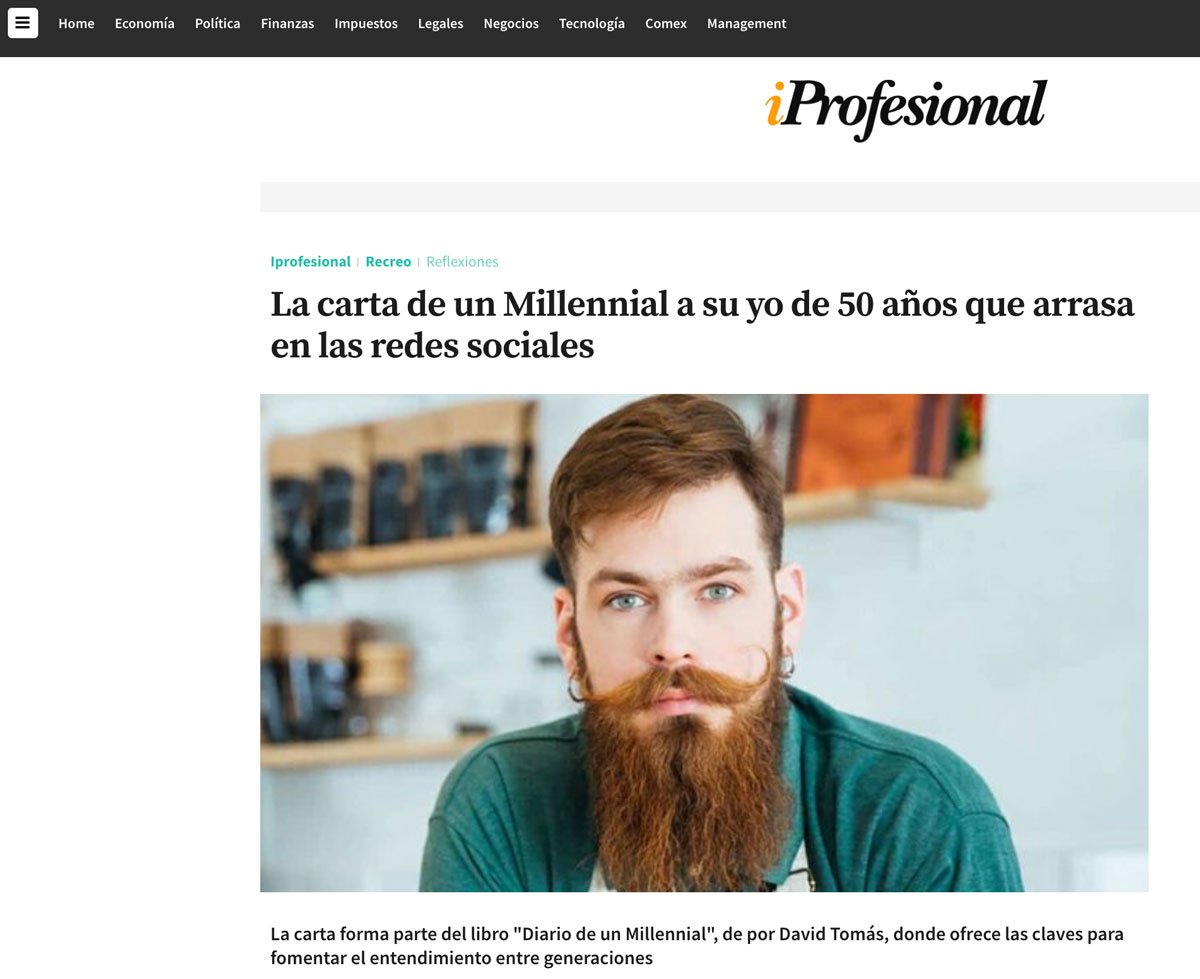 In Merca 2.0 they mentioned the letter along with 2 others, as an essential reading if you want to improve your marketing strategy. 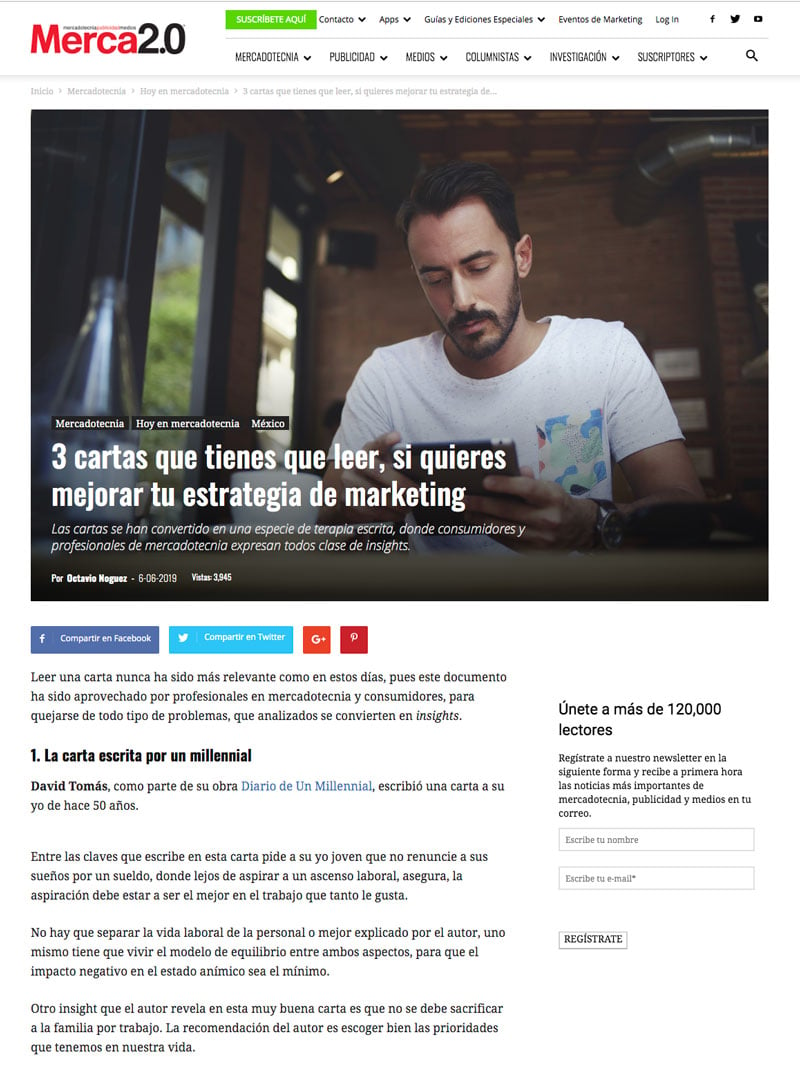 With these two examples I hope to have explained better how to apply viraljacking in your brand strategy on social networks and get your content viral organically.

I am happy to hear about your questions! :)