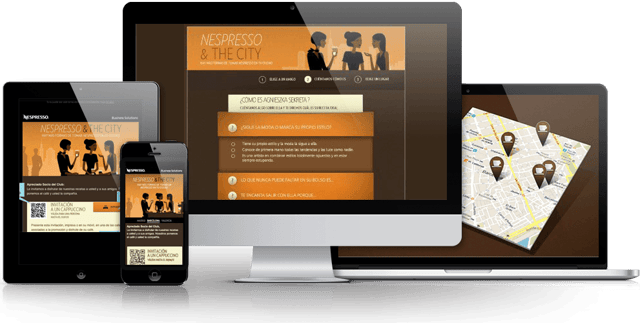 In May and June 2013, the B2B division of Nespresso conducted an email marketing campaign on the partner base of Club Nespresso of Barcelona, Madrid and Valencia. The goal was to approach the consumer base to the new Aguila machine. This machine combines the best traditional methods of coffee making with the latest advances of Nespresso for facilities with a large volume of business, capable of making hot or cold coffee gourmet recipes at the touch of a button.

The campaign consisted of carrying traffic to an application on Facebook with which the user could discover the Nespresso recipes available at coffee shops that carried the new AGUILA machine. Additionally, the application generated a customized voucher that could be redeemed for a recipe in one of the participating coffee shops.

The email marketing action, coordinated and conducted by the agency Digital Response, specializing on email marketing, was the main traffic generator to the application on Facebook, and also of carrying traffic directly to the coffee shops.

With the goal of leveraging the impact of the email marketing action, a QR customized code was included in the email so the user could redeem it for one of the Nespresso recipes at the coffee shop.

Step 1: Customizing the QR code on the email and voucher

Once on the landing page, the user could print the voucher. For a reasonable and economic print, the voucher included an array of gray, black and white colors.

One of the goals of the action was to also trace the behavior of the different segments of the data base. There were 4 big segmentation categories based on socio-demographic data with their respective variations.

A total of 24 possible combinations were translated into 24 segments. This allowed to recognize which database segments had a better behavior. This information is very useful, since upon analysis it allows to understand what type of segment is more reactive to what type of action.

Step 3: Including Google Analytics tracking to determine the origin of traffic on the Facebook app

The emailing sent to each of the segments included an Analytics tracking identifying the source, medium, content and campaign. In this way, analysis of the traffic to the application on Facebook allowed to control, upon arrival, the validity of the email marketing metrics. Thus, for example, if the number of clickers of the campaign on a certain segment was 5,000, the number of the unique visitors to the Facebook application from that same segment (from the Analytics point of view) also had to be 5,000.

The interesting thing of the dual measurement (on the email – origin – and the application – destination) is that it allows to detect inconsistencies and thus determine, on the one hand, where the error occurred, and on the other hand, increase the reliability of the results obtained.

Step 4: Resend message to those who didn't open it to maximize conversions

One week after the campaign, the emailing was re-sent to all those users who received the first batch but did not open it. This action allowed to significantly increase the number of unique visitors to the Facebook application and the number of redemptions at the coffee shops.

The 48.66% of visits to the application on Facebook were generated through email.