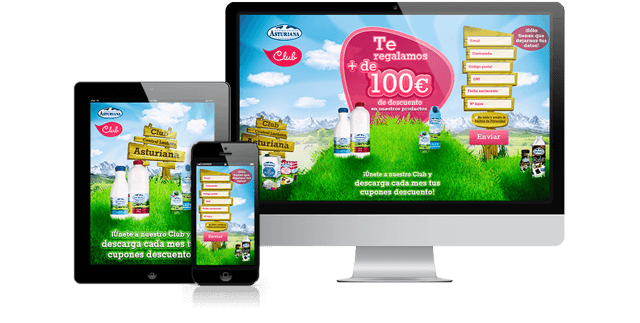 Central Lechera Austriana was the first dairy product brand to be founded in Spain in 1969. With an innovative spirit, it’s a company that offers quality products to its consumers, and assures the sustainability of the sector and the adequate retribution of the value added by each and every component of the milk supply chain.

At the beginning of 2015, they decided to carry out a multichannel strategy with two goals: to increase the number of visits to the website and attract new members to the Central Lechera Austriana Club. Related to the first goal, it was also sought to increase the time spent by users navigating the website, and boost the brand’s exposure to consumers via the generation of high quality content of interest.

It is Cyberclick who has taken on the responsibility of carrying out this strategy, through an array of advertising and digital marketing actions.

In order to attract a high number of quality visitors to the brand’s website, a Native Advertising campaign was put in place.

A new section was added to the website, named Advice, which included content related to the brand and the values it stands for (healthy nutrition, food intolerance, lifestyle, etc.) with information valuable and useful to users. 10 articles were created in an initial phase and since then 2 to 3 new pieces of content per trimester are added to continuously optimize the campaign. Traffic was attracted to the website through an ample network of reference portals in Spain. Articles were mentioned as “Recommended Reading” by entities such as El País, Mejor con Salud, La Vanguardia and ABC.

To attract new members to the Central Lechera Austriana Club, an e-mail campaign was developed, with over half a million e-mails being sent to various databases, dedicated to the brand’s target audience. This campaign directed traffic to a landing page on which new members could get product discounts every month over a year, with the aim of sustainably encouraging activity and permanence of members in the club.

The strategy also included using Facebook to spread the word of the above mentioned promotion on different profiles related to the target audience. Through these actions, we reached out to over half a million Facebook users.

The website has received over 80000 to date and counting, through the created articles, click a click ratio of around 0,25%. Moreover, the consumers’ behaviour on the website has been extremely positive, with great response to website navigation to other articles or sections, and a low bounce rate. As for the emailing, the opening rate was 15% and the click ratio reached 16%. The membership registration, once on the landing page, was over 30%. This allowed for a very profitable and competitive cost per lead.

In the case of Facebook, an average CTR of 1,25% was achieved, and a membership registration rate over 10%. This means that more than 10% of users who were directed to the landing page registered as members of the Central Lechera Asturiana Club.